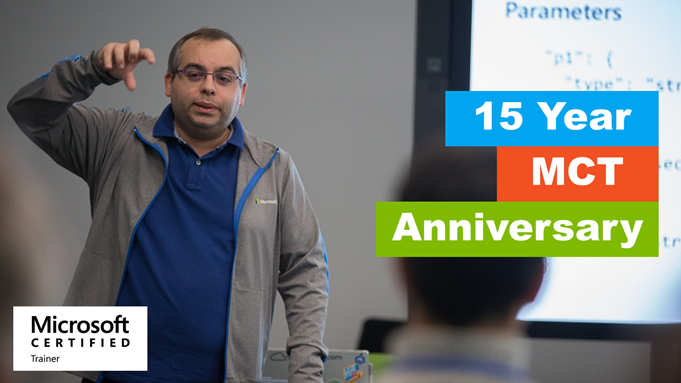 Today, 15 years ago I got accepted has a Microsoft Certified Trainer (MCT). It was a changing moment on my professional career. I started teaching more often, was able to use Microsoft Official curriculum materials and most important I got introduced to the MCT Community. A true global family! Being a global traveler, I always have the chance to meet my MCT sisters and brothers, share a drink a meal having great conversations!

I try my best to give back to the community and help other MCTs. I have been accepted has an MCT Regional Lead and provide feedback and help my local community, but the best award I got this past April when I receive an award voted by the MCT Community – The Enrique Lima award. It was a big emotional moment for me, for all that Enrique represents for the MCTs to get an award with his name. It’s in central display on my office! When working from the office I always start the day by looking at it, remember Enrique and try my best to help every individual to achieve more! I do this on my consulting role but also on when training others. We all have the power to change other professional lives.

I’m focus on Microsoft Azure both in training and consulting, but I started my teaching career with Microsoft SQL Server. Still remember the first MOC I taught. I think it was M2074: SQL Server 2000 or 7 Administration. It has been quite a ride from that to Microsoft Azure. If one thing working with Microsoft all these years taught me is that you need to constantly go out your comfort zone and adapt to the new realities. From teaching in-person only to teach virtual and hybrid classes, the need to use other tools, … Maybe this is a great topic for another post

What best way to celebrate my MCT anniversary than spend the day teach one of my favorite classes – AZ:104 – Azure Administrator. It’s a great class and I love to deliver my version of it! 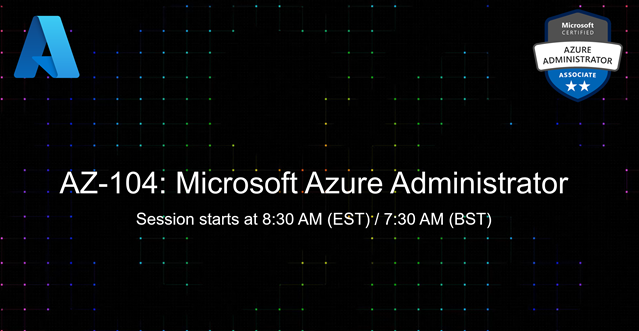 It was time to order my 15-year gift! An amazing jacket. Looking forward to getting mine still on time for the winter! 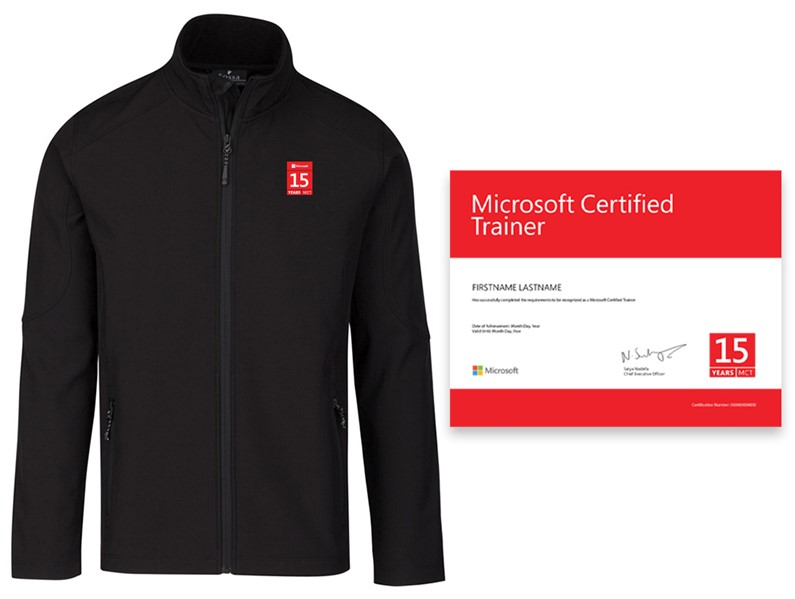 Stay safe and hope to see you all in a nearby event / class! 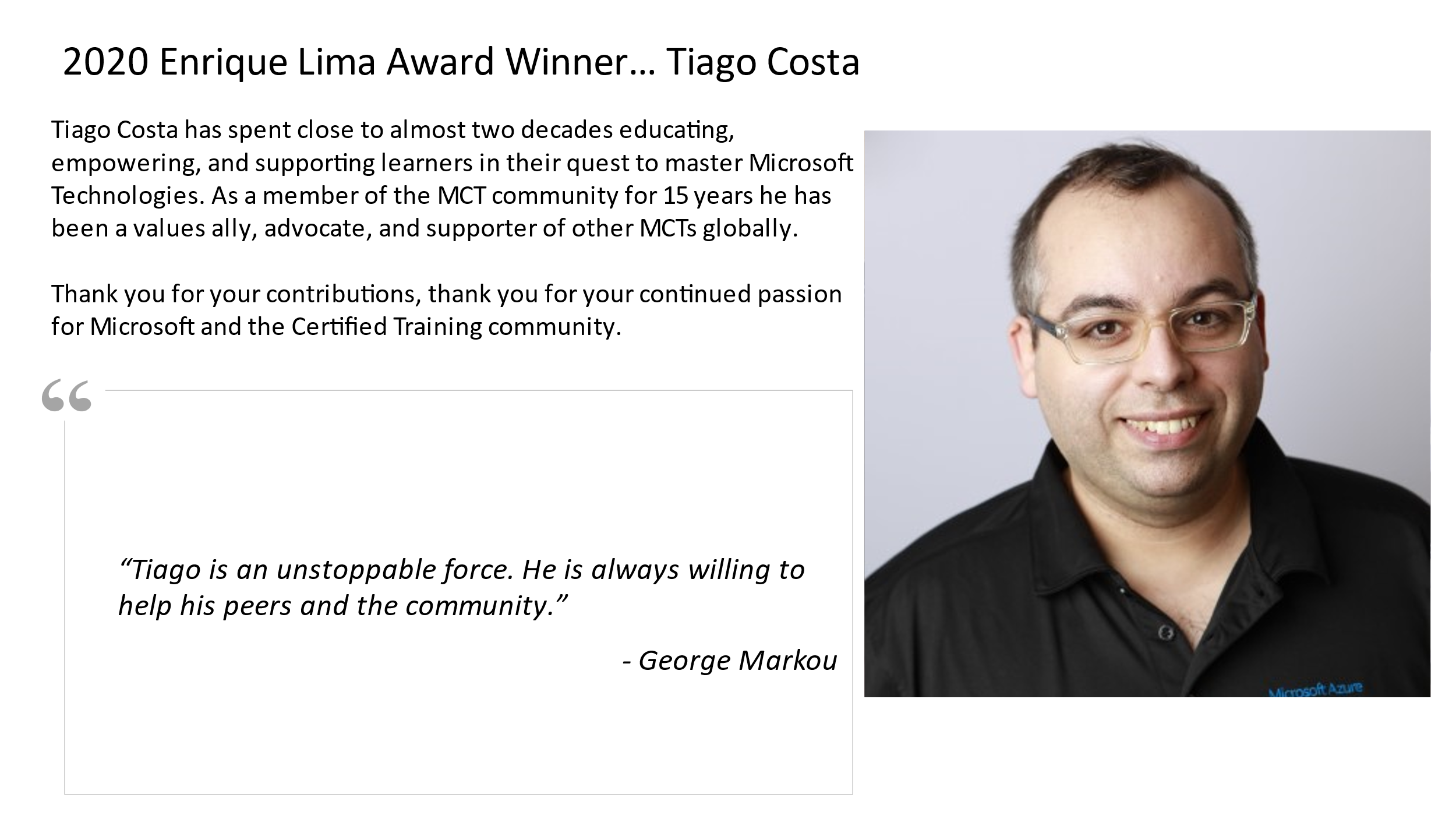 This past Tuesday – 12th April, I got awarded with the Enrique Lima award. This is probably the hardest post I ever wrote… I have no words to describe the feeling and how much this award means to me. Enrique was an amazing person and a great leader on the MCT Community – a true role-model. Unfortunate he passed away during the MCT Summit in Bellevue in 2016 and Microsoft Learning (now WWL – Worldwide Learning) decided to create this award in his memory. The list of awardees is impressive, but I need to highlight the MCT previously awarded – a good friend and MCT Regional Lead for the UK – Chris Rhodes. Chris was an active member of the community, always available to help and available to share his knowledge by speaking in conferences and user groups. Unfortunately, Chris had passed away after battle a long-term illness. So, I like to think about this award as a dedication all the hard work of all the MCTs that are no longer among us!

I got the award at 12:30 AM… Very late for me. I barely sleep this night thinking and remembering some great conversations with Enrique and Chris. Let’s not cry but remember all the good time we spend together with Enrique, Chris, all other MCTs that are no longer with us!

I final message to all the Microsoft Certified Trainers that selected me for this award, it is a great honor to carry your trust and an award with Enrique’s name! A special message for George Markou – Σ’ ευχαριστώ αδερφέ μου – that sent this kind message to Microsoft Learning!

What is the Enrique Lima award? 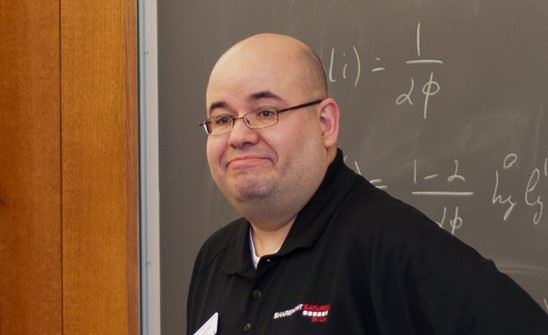 Recognizing and celebrating the outstanding work of Microsoft Certified Trainers

The Enrique Lima Award was established to honor the contributions of Enrique Lima—a husband, a father of two, an MCT and MCT Regional Lead—who went above and beyond expectations to build a vibrant MCT Community. Enrique personified the spirit of the MCT Community. Today, the award is given to those who embody the same knowledge, passion, and commitment to the Microsoft community, as a whole, and specifically to the MCT program.

The list of the previous awardees is quite impressive. Great leaders of the community. 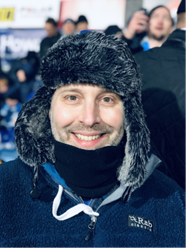 For over 20 years Chris brought change and opportunity to the classroom, empowering thousands of learners with flair for knowledge transfer drawn from a lifelong commitment to teaching Microsoft technologies.

His Exchange Server knowledge saw him ghost co-write an Exchange book and many official exam questions. He later specialized into PowerShell and Windows Server and earned the coveted Microsoft Most Valuable Professional (MVP) award seven times for his Windows expertise and community activities with the Windows User Group, and later the Microsoft 365 User Group in Yorkshire.

Chris was a career MCT, popular and regarded, highly, amongst his peers. Over the last 23 years he has helped thousands of IT professionals in their careers, teaching Microsoft technology courses both throughout the UK and internationally.

Sadly, Chris passed away in July 2019. Chris loved his wife of 21 years, Steph, and their seven children and will be greatly missed by his family, friends and fellow MCTs. 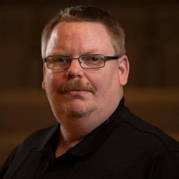 Prior to joining Microsoft as a SQL Premier Field Engineer, John spent 17 years as a Senior Technical Instructor for New Horizons of Indianapolis. John has been a Microsoft Certified Trainer (MCT) since July 2000, and an MCT Regional Lead since 2012. He specializes in teaching Windows Networking, Active Directory, Exchange Server, and SQL Server courses. He has also been a guest speaker at several dozen SQL Saturday events across the United States. John currently serves as a board member for the Indianapolis SQL Server Users Group (IndyPASS) and is one of the lead organizers of the SQL Saturday event held annually in Indianapolis.

What achieving the 2018 Enrique Lima Award means to John: “Being awarded the Enrique Lima award by the global MCT community was such an incredible honor. Enrique was such a large part of the community in the giving of his time, knowledge and heart, both locally and globally. I was deeply humbled to bring the spirit of this award back to our shared hometown of Indianapolis.” 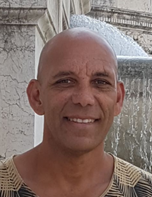 A former Mathematics Lecturer turned developer Glenn has transitioned into the Data Science stream over the past decade. During his move to the Information Technology world Glenn realized he enjoyed passing on his passion for technology and became a Microsoft Certified Trainer. Glenn’s passion extends to training and empowering people.

Glenn alternates between training in the classroom and consulting, but admits he has a leaning towards the classroom.

Glenn’s statement on receiving the 2017 Enrique Lima Award: “I was incredibly honored to receive the Enrique Lima Award. Enrique was one of the people that inspired me to be a better trainer and, more importantly, to be a more giving and community minded MCT. Being based in Australia I often felt detached from the greater MCT community but after meeting Enrique, he took time to introduce me to people and communities all over the world while inspiring me to become a leader in my own region. With his help and guidance, I have run a number of MCT Events in Australia, become a Regional Lead and generally become a better trainer and member of the MCT Community. I guess it is all the little things he did that made him special.” 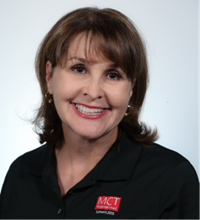 A Microsoft Certified Trainer (MCT) since 1995, and a current MCT Regional Lead, Rachel Jones’ greatest passion is to broaden the reach of computer science education across diverse populations. Rachel’s 25-year career includes work as an instructor, software developer and content developer. She authored a computer science textbook used worldwide, and she is a subject matter expert with Microsoft helping to shape industry curriculum and certifications. Her education includes B.S. degrees in both Computer Science and Marketing. In addition, she holds several industry certifications.

When asked about what the 2016 Enrique Lima award means to her, Rachel replied, “Enrique Lima was a close friend and a colleague. He loved he MCT Community and was always the first to lend a helping hand to others. It is the greatest honor and privilege of my career to be an inaugural recipient of the Enrique Lima award. Thank you from the bottom of my heart.” 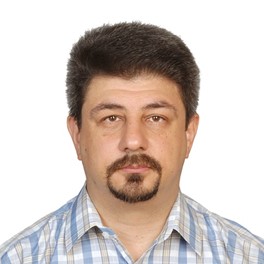 Konstantin is an IT Professional, currently working as a Learning Consultant for training companies based in Istanbul. With 20+ years of experience on the field, Konstantin focuses on Microsoft infrastructure solutions, with an expertise on Windows-based server technologies. In 2008, Konstantin was ranked 17th worldwide in certification training and rewarded by New Horizons USA with the Worldwide Excellence in Training award.

Konstantin loves to share his knowledge and volunteers as a mentor for colleagues who want to become certified trainers. Konstantin leads the Turkish Chapter for the International Association of MCTs and is the Microsoft Regional Lead for MCTs in Turkey.

What achieving the 2018 Enrique Lima Award means to Konstantin: “I was deeply touched to be selected for an award bearing [Enrique’s] name in 2016. I also felt honored because people who were thousands of miles away from me were actually seeing my efforts. Until then, I did not know that so many people were appreciating my involvement in the MCT community. So I felt a certain responsibility to those who had recommended me for this award and I am still honored to be one of the very few people who received the Enrique Lima Award globally.“

On the 20th of July I will deliver a great workshop in Lisbon, Portugal about Microsoft Azure. This workshop is part of the Tuga IT Conference (http://tugait.pt/) and is targeted for all IT Professionals that want to start to design, create and/or migrate solutions for Microsoft Azure.

Here are all the details about the workshop:

“I find your lack of Azure disturbing”

More and more companies are implementing, designing and architecting solutions on Microsoft Azure. This full day workshop will provide you guidance and knowledge on some of the core Azure services. This workshop will be led by Tiago Costa, Microsoft Cloud architect and advisor for several customers across the world and two times author of Microsoft Official Curriculum (MOC) – 20532 and 20535. Be prepared for a demo dependent workshop, we will do our best to blow your mind!

You can sign up for this workshop at: https://www.eventbrite.pt/e/bilhetes-i-find-you-lack-of-azure-disturbing-47095724580.
Hope to see you there!!!

You can also check other workshops from great speakers about Git, Cassandra and SQL Server at http://tugait.pt/workshops/

This has been an amazing year so far! I’m very privileged to do what I love to do. This allows me to get up every day full of energy for one more long working day that sometimes involves flying around the world.

In the beginning of the year I had the opportunity to share with you that I had authored, together with another three amazing professionals, the 20535A: Architecting Microsoft Azure Solutions course for Microsoft Learning. This was my first MOC Authoring project and I loved every bit of it. If this was not enough, I just helped on authoring the update of the 20532D: Developing Microsoft Azure Solutions MOC course. This project was done with Sidney Andrews has the lead SME. What a great project too. I hope that you all love this update on this Microsoft Azure course and what better way for me to celebrate this? Yes!!!! I’m going to deliver this course next week!!! It will be 4 days of an amazing delivery in the beautiful city of Sofia the capital of Bulgaria. 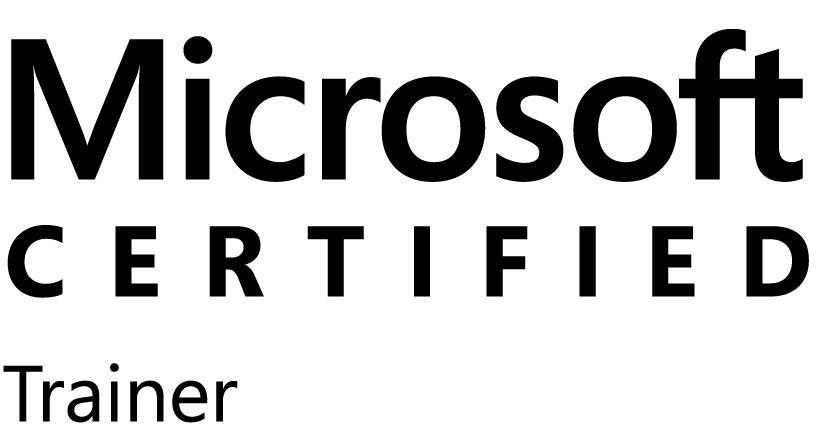